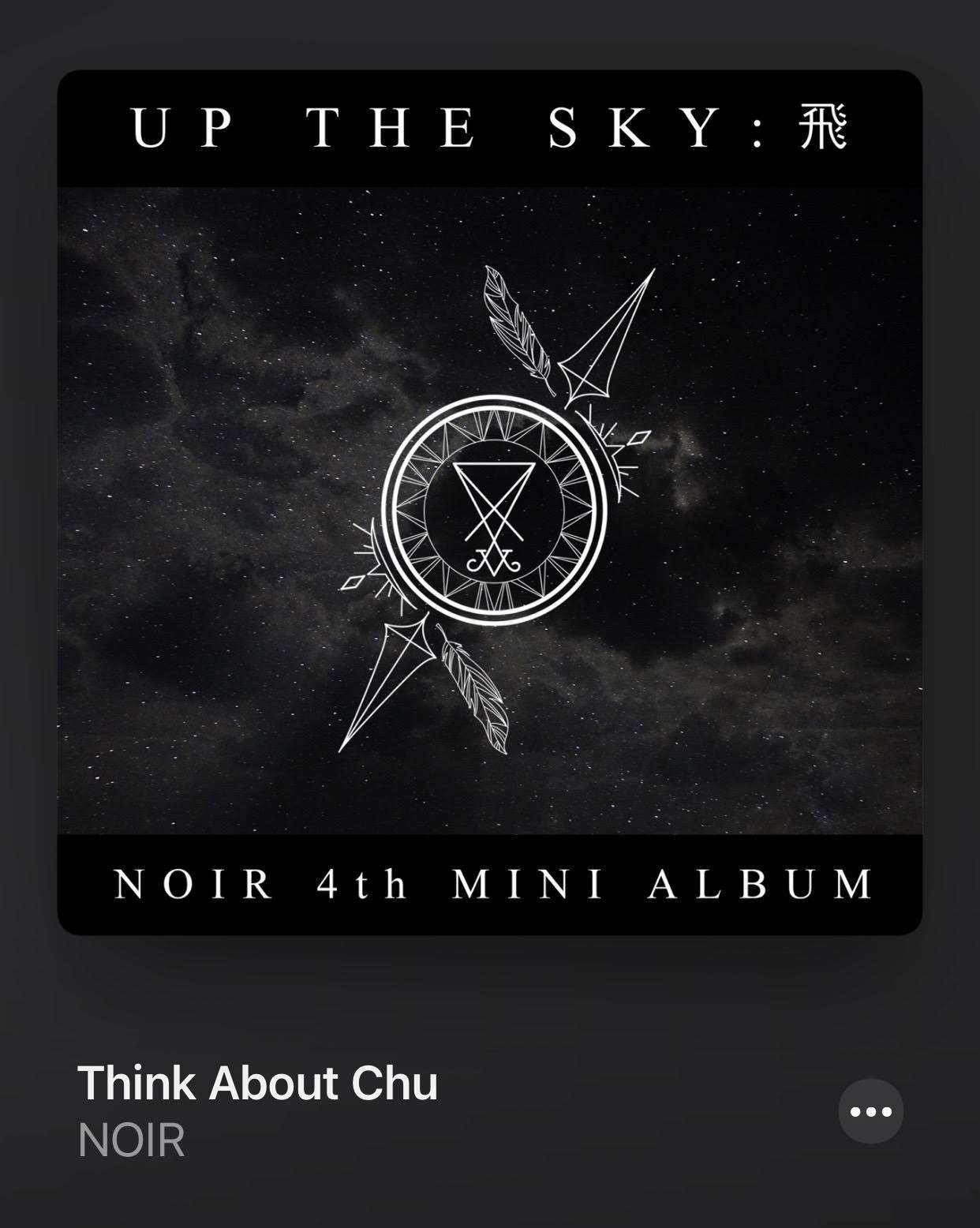 With so many comebacks these past few months it has been impossible for me to get up to speed with them all so I guess I will stay out of the mainstream a little while longer. Seems the Playlist Roulette gods feel the same way as they decided upon a light and breezy pop track from a group with a not so light name. Noir’s Think About Chu is a refreshing B-side (yes, more B-sides, can never have enough B-sides) from their 4th EP, Up The Sky : 飛. Initially, I was attracted by the mysterious Noir name, but it did not take me long to discover that this 9-member group is housing some serious vocal talent. The name piqued my interest and invited me in, the talent made me stay. 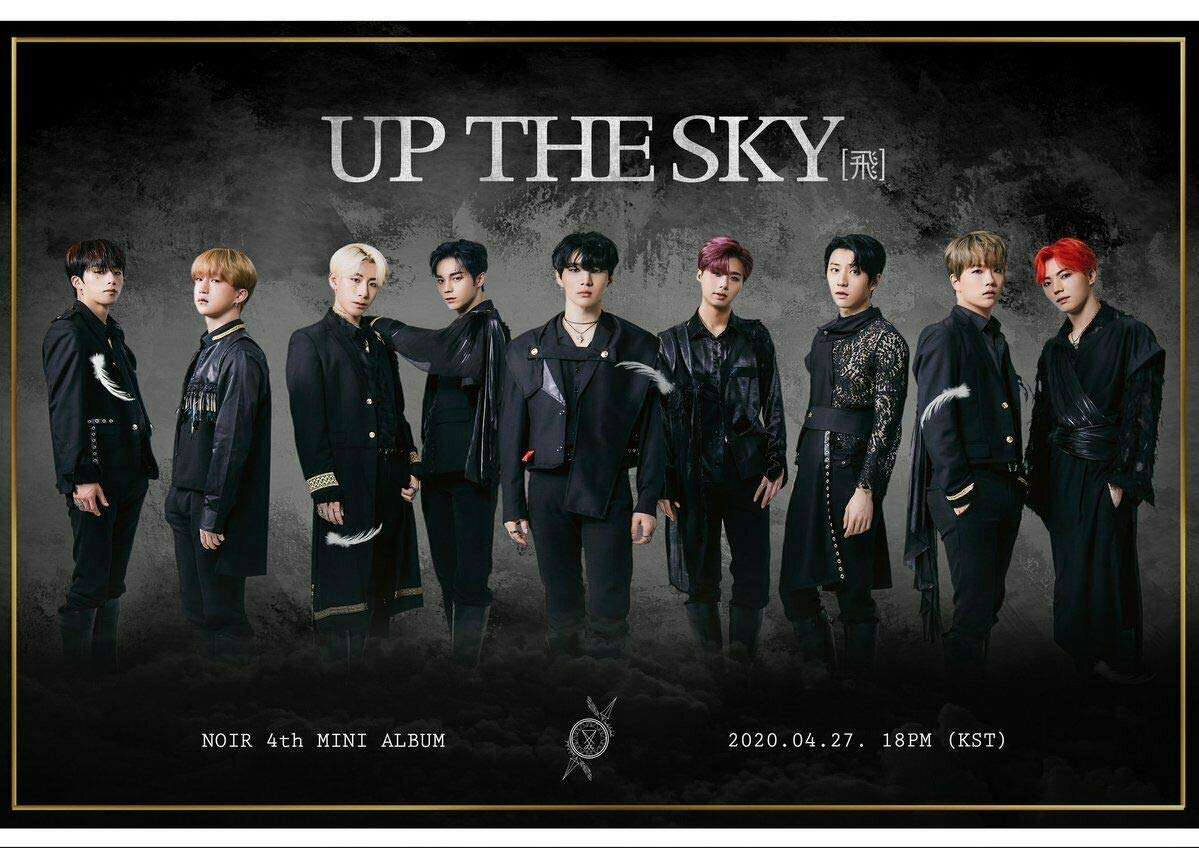 Okay, yes, the visuals aren’t too shabby either. I guess Noir is inching out of rookie status having debuted in April 2018. A few of the members actually trained for a very short amount of time prior to debuting. Vocalist Siheon for example, trained a mere five months which is in stark contrast to leader, main rapper and vocalist Seunghoon who trained eight years prior to debut. Sometimes I wonder if quick training periods can give a false sense of security whereas long haulers risk becoming disenchanted with the system. Hmmmm . . . That would be a question I would love to pose to Noir given the contrasting training times among the members. Maybe I will get the opportunity some day~~😜 Anyway, let’s talk about Think About Chu. 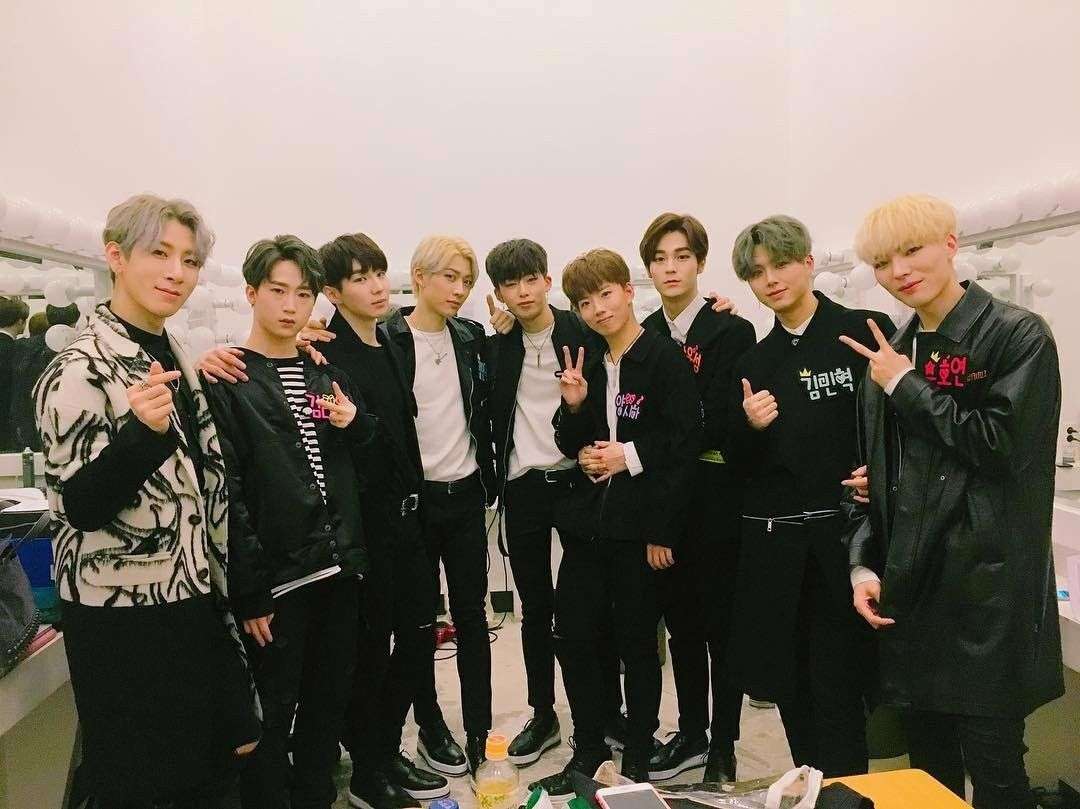 Wait though, before I get to the song, I have to talk a little about how my personal K-pop universe works as I am of the school of thought that there is no such thing as a coincidence. You may recall that I fell under the sweet spell of Golden Child’s Hong Joochan when Without You and I crossed paths. Since then, I have been on a whirlwind fangirl romance with both Joochan and Golden Child. It came as no surprise then when I discovered Joochan was cast as one of 4 idol leads in Shinswave live sitcom/musical, Secret Contract. I could go into an entire separate dissertation on how wonderfully entertaining the production was and how fabulous Joochan did in the lead role of Aaron (main vocal and center of fictional boy group, Perfect), but won’t do that here and now. I should probably set aside some time for that but, the reason I bring it up is that the fictional boy group in the production was portrayed by none other than four members of the group Noir.

To be honest, during the entire production, I did not know who the four of them were while I watched the live broadcasts and still was unaware of who they were when the Strictly Korean playlist shuffled out Think About Chu. I only recently connected all the dots when it was announced that MetaTheater was going to offer VOD of the entire production with the first episode being offered for free (there are seven episodes). It was on MetaTheater’s site I discovered that Ryu Hoyeon, Kim Yeonkuk, Kim Siheon and the cheeky Kim Daewon, were the Noir members acting, singing and dancing alongside Joochan over the course of the production. I just had to shake my head, chuckle and say to myself, ‘indeed, this is how my K-pop universe spins!’ Joochan brought me there and unknowingly put Noir into my orbit, and then the Playlist Roulette gods said . . . ‘let’s play!’ Anyway, I couldn’t help but mention that connect. In my opinion, it is not at all a coincidence! 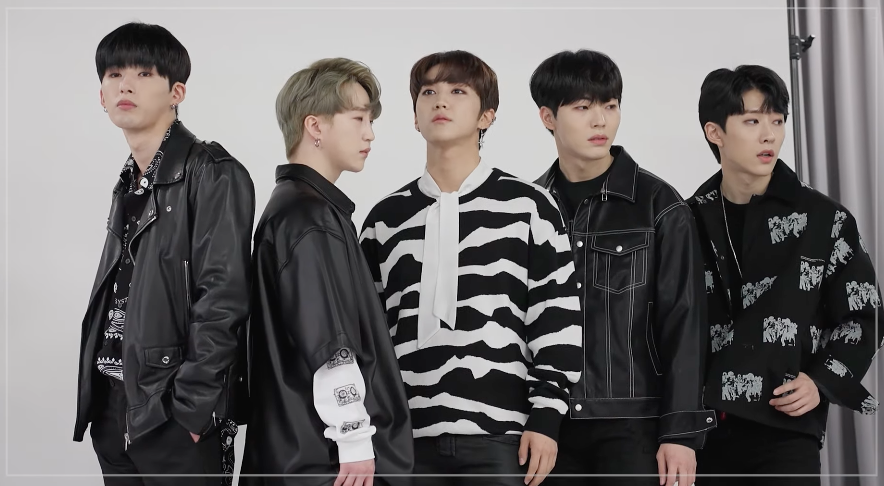 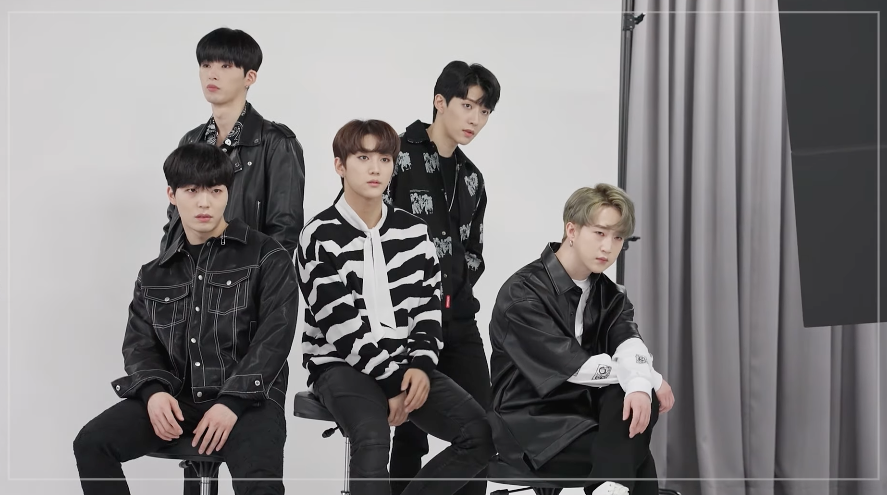 Okay, on to Think About Chu for reals now.

The song. Ok, so Noir’s last comeback, Up The Sky : 飛 featured the rather dark, aggressive and emotional title track, Lucifer, which I liked; but what I love about Think About Chu is that we get a nice opportunity to really hear each vocalist shine which is usually the case with less aggressive, lighter tracks. I have nothing against explosive in your face songs. Strays Kids Side Effects, Double Knot and God’s Menu, come to mind. But the reprieve offered by light, airy and less confrontational songs are just so refreshing. Noir’s Think About Chu hits the spot with its gentle groove and simple musings over that special someone. The vocals are so melodic and relaxing that it is almost too jarring when Seunghoon drops in with his rap break. Admittedly, it feels a little out of place in the song to me. A more melodic gentler rap would have been better, or even no rap break at all. Minhyuk’s short little rap break towards the end sits a little better. Maybe because it is short and flowed more evenly into the song. Not every song needs a rap break, and yes, I know, I know, that is generally the overall song formula in K-pop. There is no MV for this B-side, but these line distribution videos with lyrics are a perfect way to hear who sings when and what they are singing about.

Refreshing and easy breezy, Think About Chu gives off springtime vibes which is perfect for this time of the year, right? It’s definitely a perfect B-side foil to the darker Lucifer.

Going back to Secret Contract for a second before I close, Joochan and members of the cast he worked with recently had a talk concert which again was streamed live with an audience in the theater. Hoyeon, Yeonkuk, Siheon and Daewon were also there to talk about their experiences. I know there probably wasn’t too much of a stretch for them as idols to act as idols, but for some reason (and this holds similarly true for Joochan), I was so happy they got the opportunity to be a part of the production. Not only does it help them branch out and try new things, it also exposes them to new fans (like me) while also giving current fans content. And given that Noir’s last comeback was last year, I am certain their Lumieres were ecstatic. I can tell you, I was over the moon being able to see Joochan in his lead role (even when it meant that I had to wake up by 5:30AM to watch the live stream ~ so worth it)!

I am hoping there is new music on the horizon for Noir. Now that I found them and got to know four of them, I am ready to cheer them on in their next comeback. 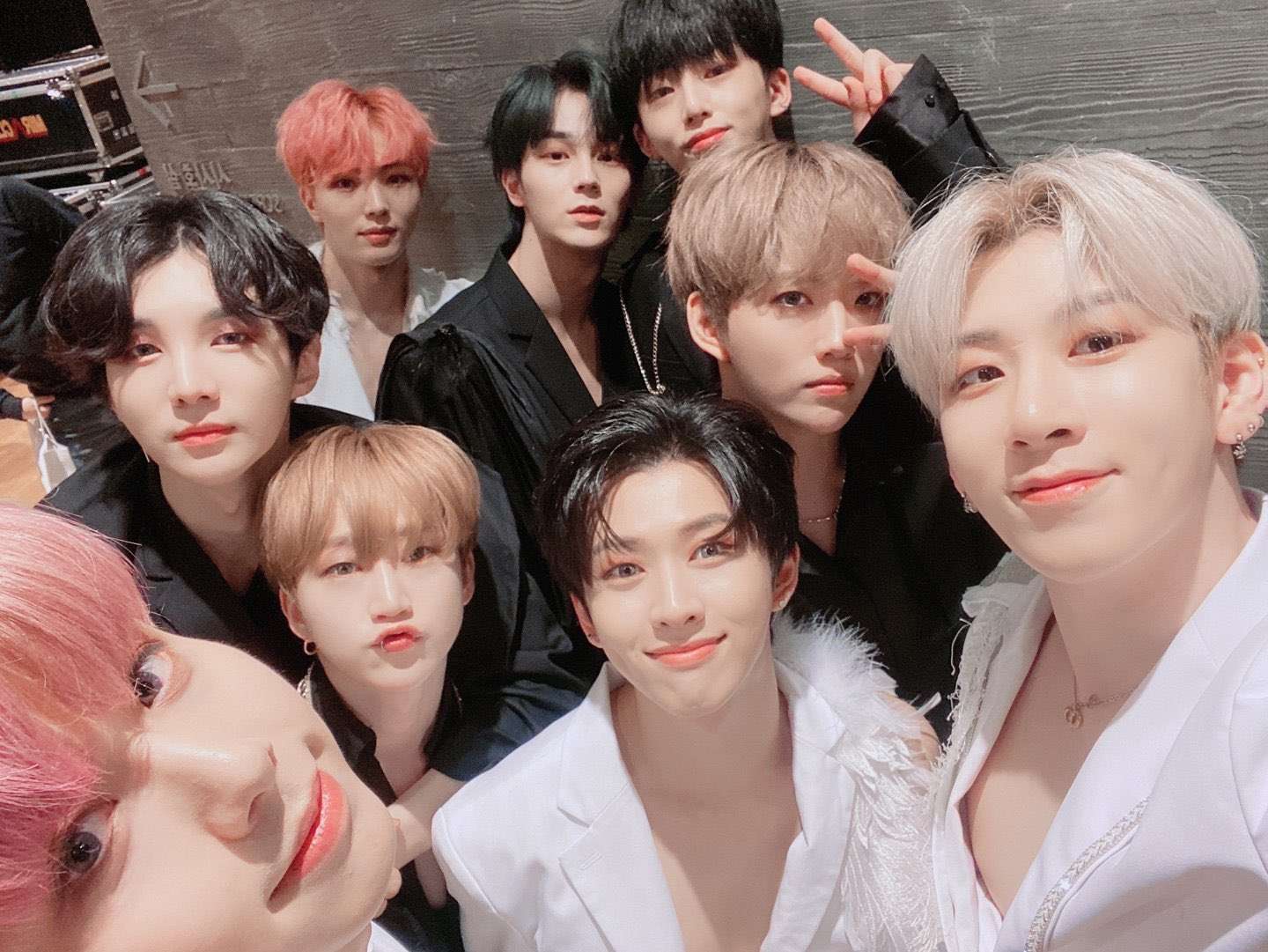 Check out Up The Sky : 飛 here: