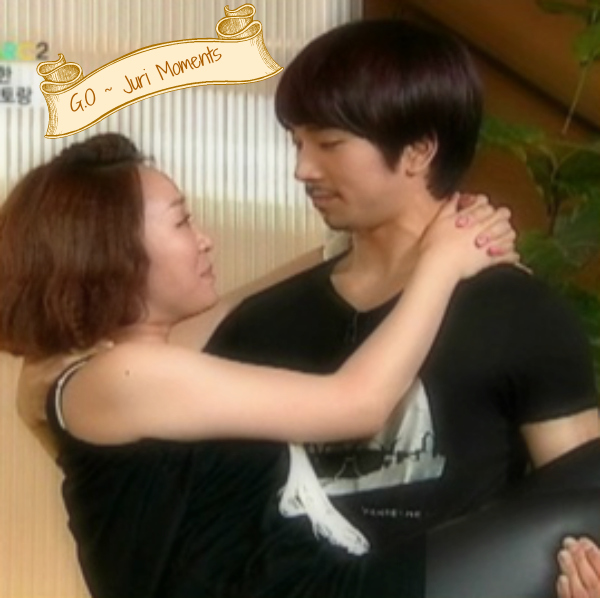 It has been quite some time since I opened up the treasure chest of G.O~Juri moments. Too long, in fact! I was thinking about them recently and it occurred to me that we could use a sweet laughter break on this 242nd day of G.O’s service.

Seems after it was unanimously decided back on a 6 February 2010 episode of Star Golden Bell that G.O was the most experienced with women, even given his young age, he assured all that it really all came down to having good manners. Juri also points out that it is not all in what G.O says with words but also in how he utilizes hand gestures. I think because comedians often use body gags and the like in their own work, they are naturally tuned into the body language of others.

But then….Juri walked right into his trap when the MC asked him how he does it and G.O demonstrated.

Yes, she walked right into that one!! He was far kinder to Ju Yeon!!! Of course, it is plain to see that Juri appreciates G.O’s sense of humor just as much as we do! To be honest, I feel that when someone openly jokes around with you in a playful manner such in the way that G.O and Juri do with each other, that a level of comfort has been reached. That a veritable trust has been established. There is no fear of offending. You understand one another’s humor and appreciate it.

I think if G.O jokes around with you or playfully teases you, it is because he is comfortable in knowing that you understand his humor and I would think can dish it out right back at him without hesitation or fear. But proceed with caution because G.O is clearly the champion of quick-witted responses, come backs and skillful, yet absolutely playful trolling.

As well as the possessor of the sweetest laughter and smile.