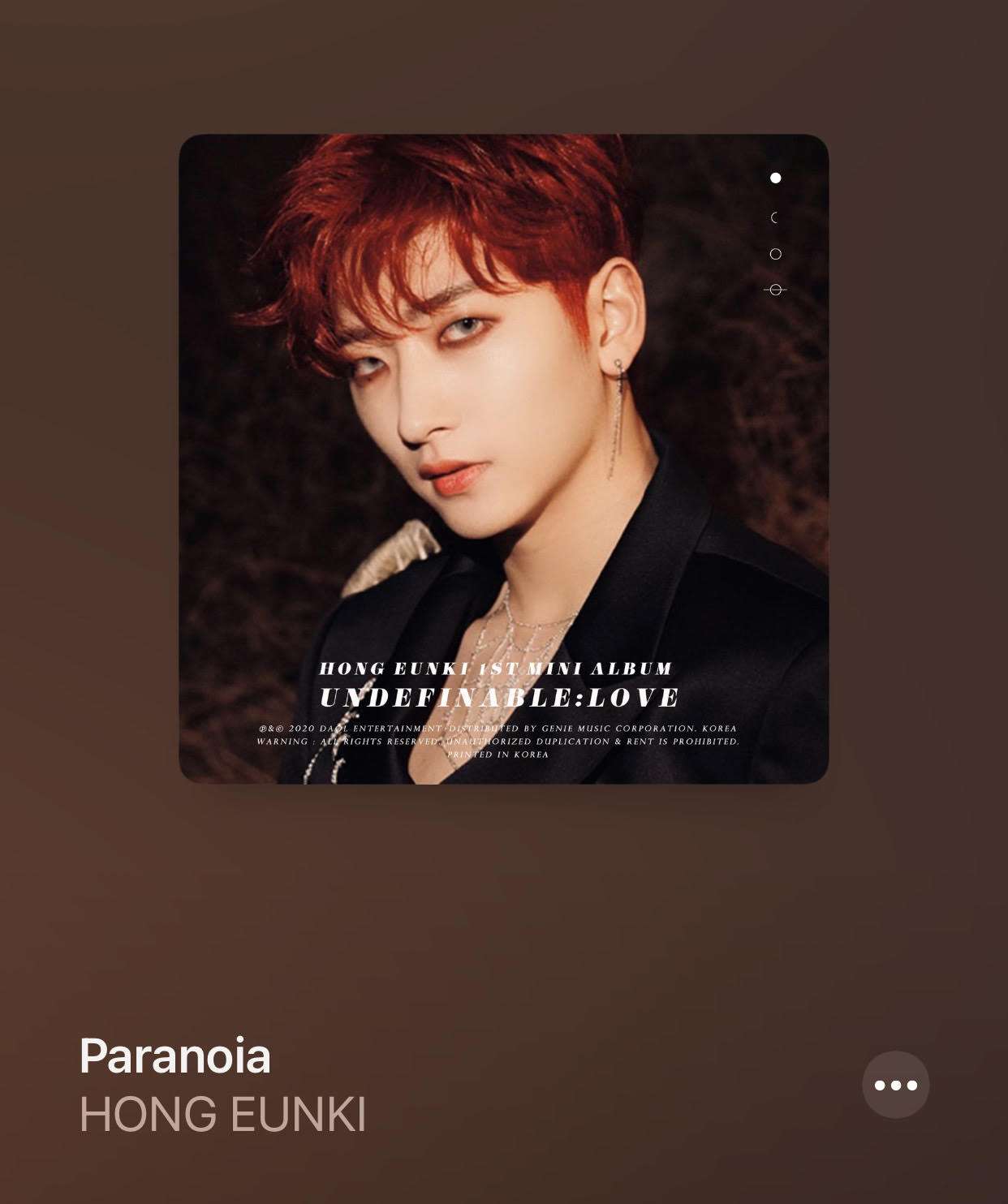 This week, the Strictly Korean playlist shuffled out the rather dramatic, dark and haunting B-side, Paranoia, from solo artist Hong Eunki’s first mini album, Undefinable:Love, and I am here for every glorious note of it. Like a mysterious doorway with a dangerous threshold calling to be crossed, Paranoia unwittingly lures with its theatrical undertones, nostalgic sound engineering, and Eunki’s striking and powerful vocals. Intriguing, to say the least. 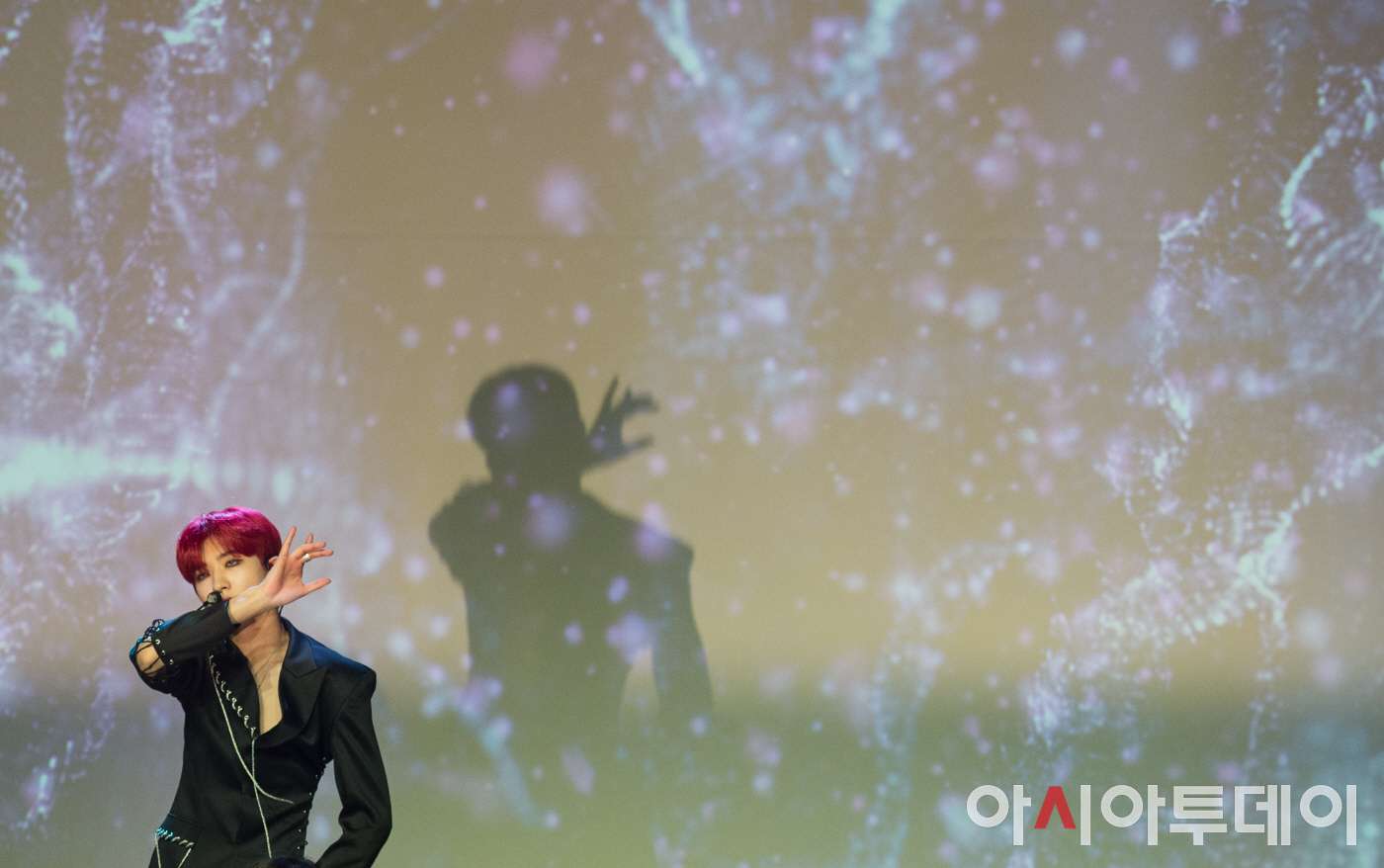 Sometimes a K-pop track comes out of left field with a sound so unique and different that it feels like it may have been part of a musical theater production. This is exactly how I felt upon first listen of Paranoia. While the title track (Breath) from Undefinable:Love is what introduced me to Hong Eunki, like title tracks often do, it became the gateway to this deeper and more complex track. I love Breath, but Paranoia ignites my imagination and paints a more interesting picture. 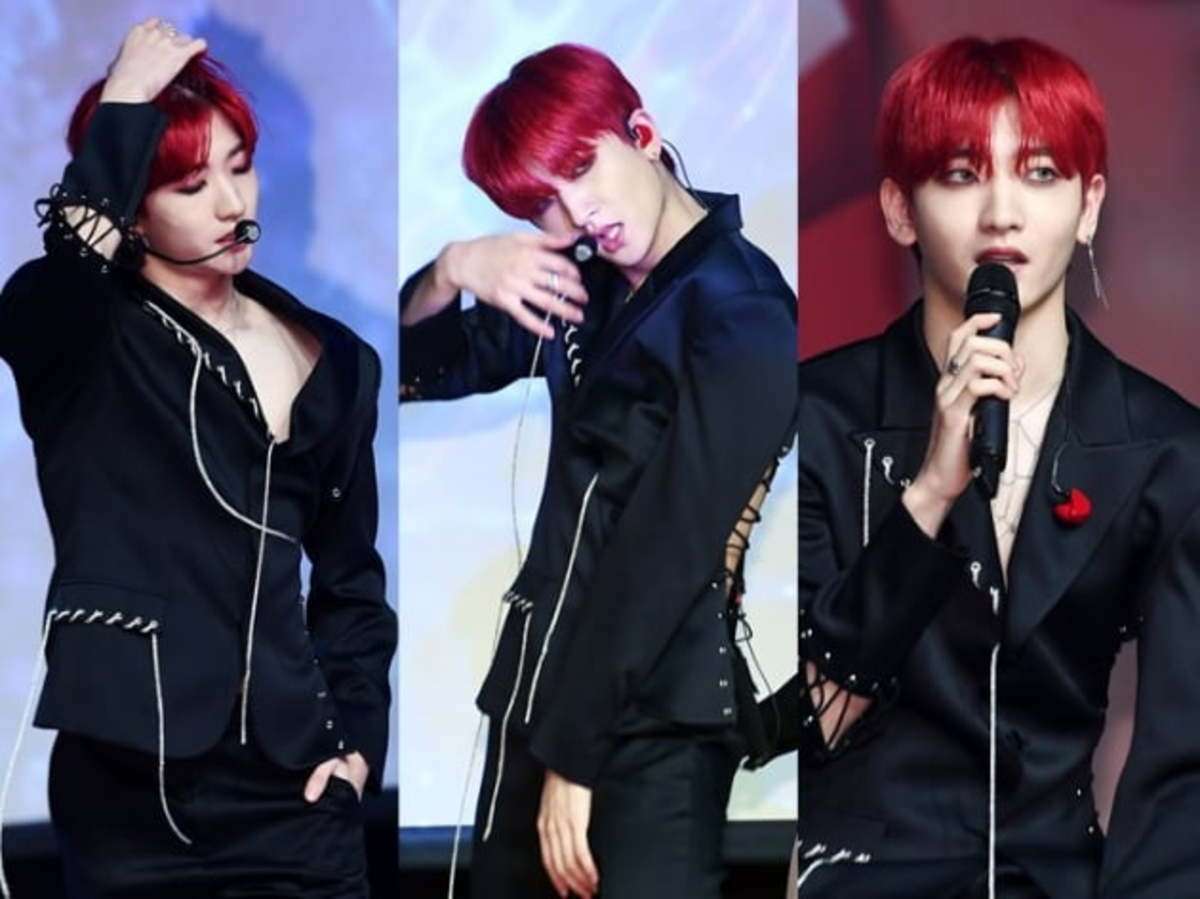 Before I dive a little deeper into the song, have you met Hong Eunki? I was not too familiar with him, so I had to do a little research. Like many, he competed on the second season of Produce 101 but was subsequently eliminated from the competition by the 8th episode. Nevertheless, he did debut as a vocalist with the post-Produce 101 fan project boy group, Rainz, in October 2017. They remained together for a year. Following Rainz, Eunki went on to forge a solo career and debuted as a solo artist on July 19, 2019 with his first digital single, Blow. He has released four singles (Blow, Mistake, Flower, and most recently in January 2021, On & On) along with his one mini album, Undefinable:Love. Ok, on to Paranoia. 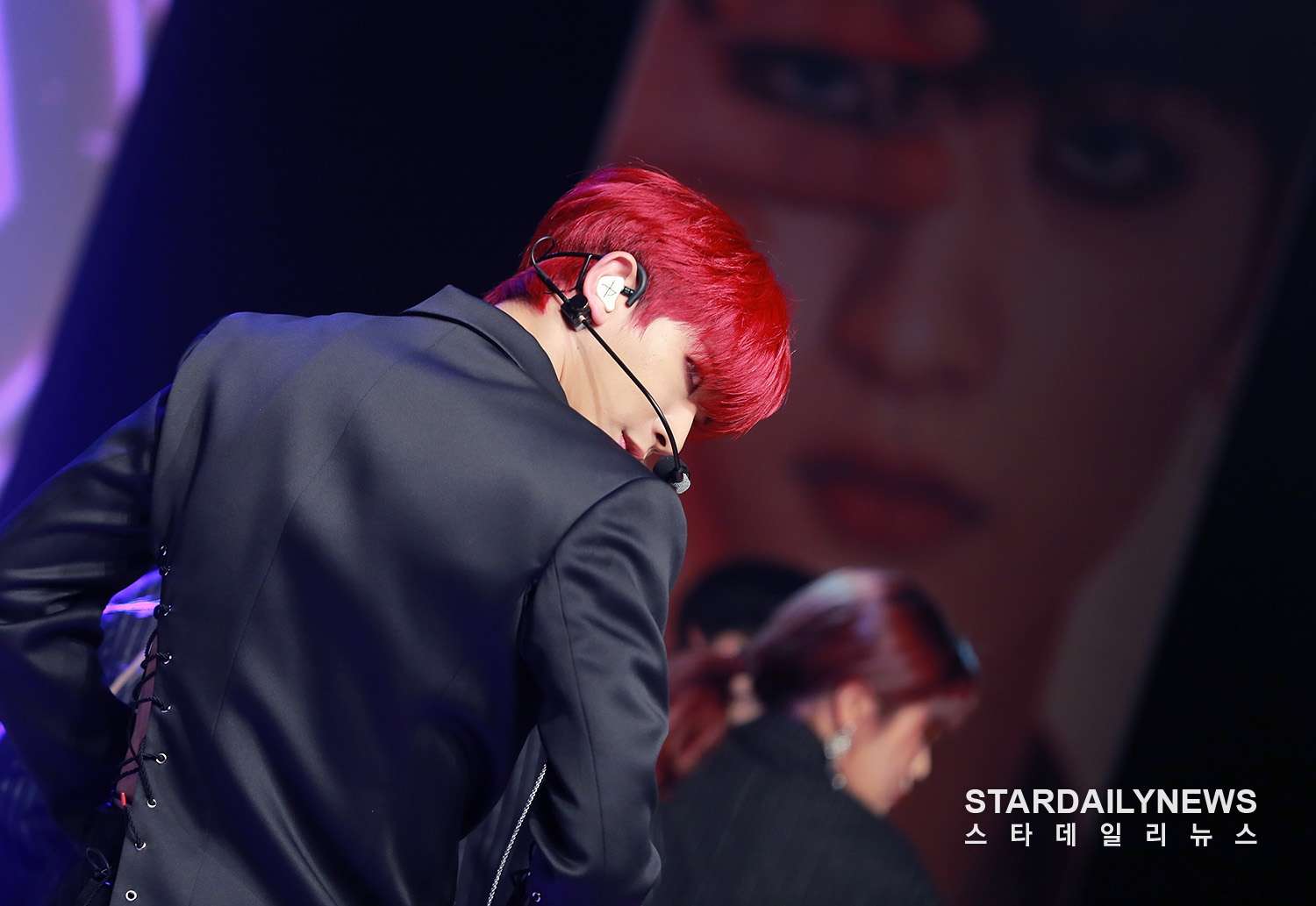 The song. Artistic vision is not always about the tangible, especially with music. While it is true that opera which has been around since the 16th century, mixes music with performance, as well as later evolutions, vaudeville and musical theater, technology and the music video revolution of the 1980’s really changed how we experience music. Still, the deep recesses of our hearts are music’s best interpreters since, as it is a language of its very own  (with or without lyrics), music speaks to our emotions.

Eunki’s Paranoia feels at times sinister while simultaneously sensual. As I mentioned earlier, it reminds me of something I could easily hear in a musical theater production. When I listen to it I envision a dark stage, our lead actor sinking into a debilitating despair, surrounded by angels that he is unable to determine are good or evil, yet he is willing to seek their counsel, follow them or, in true musical theater fashion, join them in lyrical and expressive dance. Too much? Well, when a song has an instrumental bridge such as this one, I can’t help myself!

Lyrically there is a darkness to this song which is not surprising considering the title. But, it is not a darkness one may fall into say, after a break up. This feels more visceral. Dramatic and intense, the rise and fall in Eunki’s glorious falsetto makes it all that much more powerful. The subtle addition to the crackling vinyl sound that shows up in verse two is so random yet my musical theater mind visualizes a screen backdrop on the stage projecting some obscure silent movie clip. Again, too much? You cannot give me a B-side of this calibre without me losing my fangirl composure. How I wish there was a MV for this song!!

Alas there is not, but there is audio. Sit back and let the music create its own story in your mind:

Listen, Breath grabbed my interest, but Paranoia had me subscribing to everything Hong Eunki from his IG to his Daum Cafe. This is the second Hong man infiltrating my realm in a matter of weeks. What’s happening?! 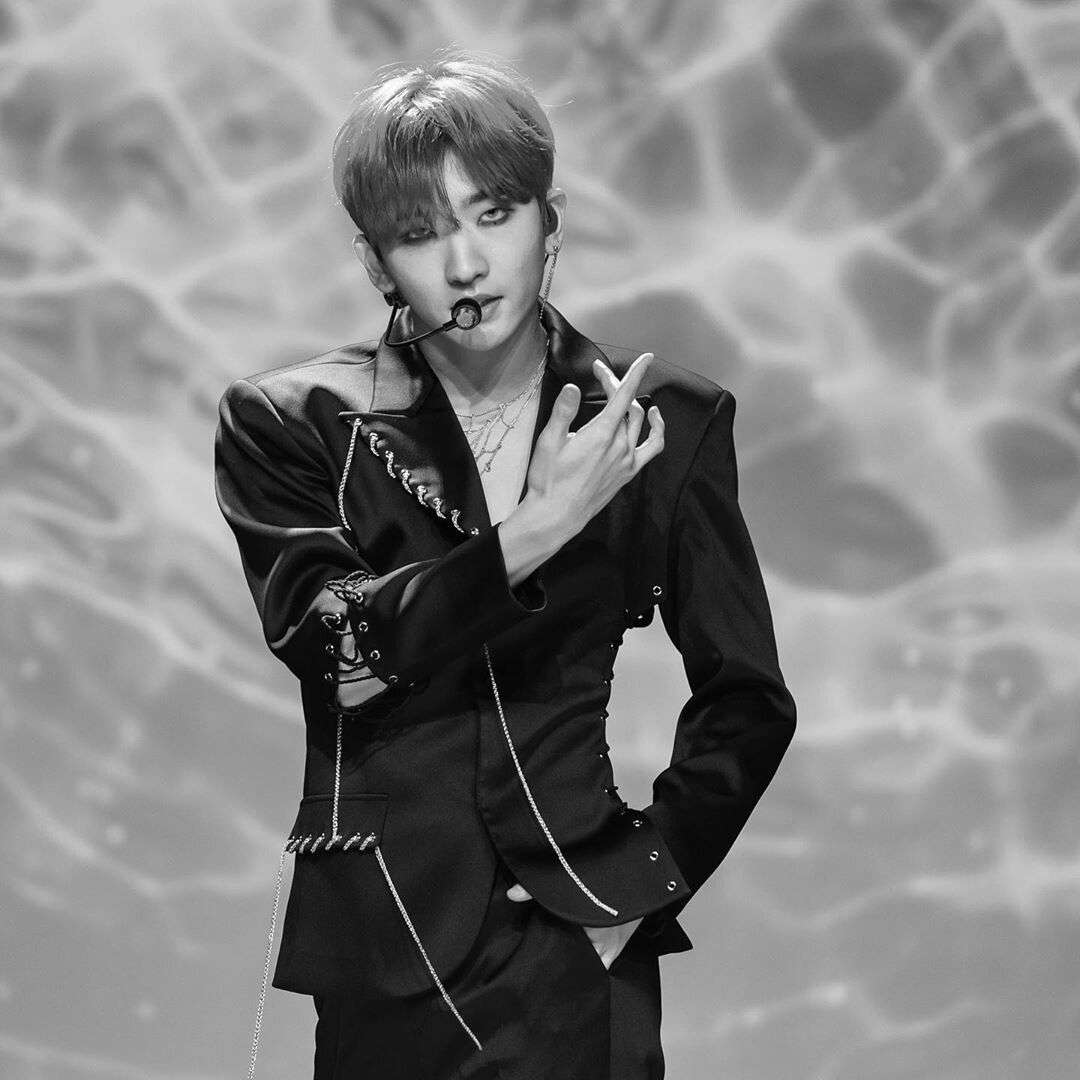 I am duly intrigued and this Mr. Hong is also on my radar to stay. At the time his debut single Blow was released, Eunki had left the agency he had been signed with (GON Entertainment) and was basically on his own. On March 8, 2020, he announced via his official Instagram account that he had joined a crew (Red Ginseng Crew) and established an agency with them called Daol Entertainment. Per his IG post, he said they chose the name ‘Daol’ because in Korean, daol (다올) means ‘everything you do will bring good luck.’ It is his hope and ambition to grow Daol into a global company. Personally, I like seeing artists who have been part of the agency system become CEOs of their own domains and I for one, am rooting for Eunki global domination.