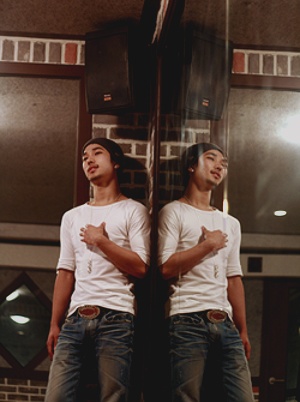 When you wake one morning and realize all you want to do is sing, you hear music in everything. I have a feeling this is exactly what G.O felt when that realization hit. From that point on, he most likely became an ardent student of music. And although it was no doubt he was hearing his own compositions in his head and perhaps keeping a journal of poetry that would transform into lyrics, the first songs he sang were probably the songs of other artists. For G.O, I suspect the songs he sang in those early days were his guide and his lessons, and the artists themselves, his mentors and his teachers. It is no wonder then he would ultimately pay homage to them by covering those songs that guided him to become the incredible vocalist he is today. The beauty of his education, however, is that he did not limit himself to the songs of Korean artists. His deep respect for music (all music) and his choice to cover many songs that were sung in a language foreign to him (English) are valid and honorable reasons to continue to love this amazing man.

END_OF_DOCUMENT_TOKEN_TO_BE_REPLACED When I decided upon one of the MBLAQ boys as my next K-Shot, I thought I would have immediately gone straight to Yang Seung Ho who I always felt was my favorite. And true, I could have chosen any one of the members as they all have that special something. If they didn’t, Rain would not have singled them out and groomed them as he did, right? Then I watched the Cry MV and G.O just did me in and promptly stole me away from Seung Ho. In my opinion, he has a lot of Rain quality about him. The way he moves, the way he plays to the camera, the way he delivers a song – all reminiscent of Rain. Furthermore, I think he resembles Rain very much. And, G.O is sexy. And so, of the five that could have made their way here, it is G.O who out-ranked the rest as my next K-Shot of Hot. ♥